Positive Borders – Opposing the Dichotomy of Open vs Closed

Within our current economic paradigm, where the worth of our currency is ultimately dictated to us by the international powers-that-be, and the value of our labour is reduced to a commodity to be exchanged freely on a global market, any kind of protection of our national interests merely based upon heavily restricting immigration is futile. Multinational corporations flaunt their power in what is essentially their own “borderless world,” freely seeking for what serves their own selfish interests best. They are free to outsource work to foreigners, establishing production facilities in places where labour is cheapest (ie. slavery). Ultimately, there seems to be no real protection against foreign ownership within our private corporate and industrial sectors, as well as ownership of our arable land and water supplies.

However, with the establishment of a locally-based, labour-backed currency, as proposed by our Party, such avenues of international exploitation would be closed. In this sense, our economic borders would be closed. All income generated by the productive labour of our people would remain solely within the borders of our nation. Any necessary trade for products or resources from overseas would be negotiated based on barter of goods produced within our national economy. Thus, even for those who immigrate to Australia who had not yet acquired citizenship, all benefit of their labour would only hold any exchange value within our national economy.

Who Will Embrace our Common Folkish Vision?

So for those who may have read my firsttwo articles and misconstrued that I was expousing an “open borders” policy, I hope that you can understand now why my belief in borders does not require that I completely oppose immigration, much less hold any animosity or hatred towards those who would seek to immigrate. Such an accusation, knowingly or unknowingly, is just another right-wing “strawman” to distract from the essential common sense of my position. Instead, the brand of genuine nationalism that I am promoting fosters a strong belief in borders with a positive attitude towards those immigrants who are willing to support our common folkish vision. 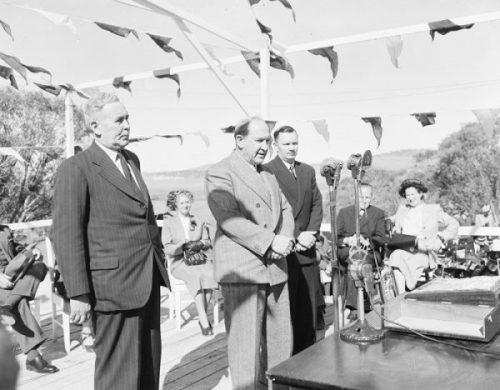 One of the essential principles of our philosophy of life is to work towards the integration of individuals into the greater community, which applies both on a local, as well as national, level. We believe that every individual should fulfil the role within society which is most suited to their character, talents and abilities, and thus we aim to foster Australia’s development into the kind of society where everybody can make the best use of their talents and abilities.

We value personal character above all, irrespective of conventional barriers such as gender, cultural or socioeconomic heritage. It is for this reason that we stand for free education as a means for the raising up of our future national leaders and contributors in every field of endeavour for the good of all. Just because somebody may not have been born in Australia does not mean that they can’t freely choose to embrace this vision and contribute what talents and abilities that they have been endowed with for Australia’s upbuilding. It is for this reason that we believe in positive borders which protect what we are seeking to establish, while allowing for those with similar hearts to join us in our efforts for building a better society and a brighter future.

We must work to imbue both our citizens (and those who would seek to acquire citizenship) with a feeling of pride of having the opportunity to dwell in a country where they will not find their bed nicely made for them, but will rather be compelled to labour together to create something truly magnificent. Nobody should have to contribute their labour to a country whose institutions they disagree with – for to do so amounts to slavery. Thus, we allow those who desire to contribute to come, and those who do not desire to contribute are free to leave.

Every person should live somewhere where they feel that they can contribute with optimal enthusiasm. A borderless world would deny people such choice. Borders that prohibit movement across them would also deny such choice. Choice requires both the existence of options and access to such options. Globalists want to remove the options; identitarians want to remove access; both obstruct the formation of truly unified states, and both are in fact accomplices to exploitation.

All immigrants acquire residency only on the basis of accepting certain basic duties as “subjects of the State.” They will be expected to earn their keep by willingly doing any labour which is assigned to them by the State (ie. employment in public works projects) until such time as they find private sector employment. There will be no idlers who depend on welfare for their living expenses. Vocational training will be made freely available, as well as general education in English where necessary, thus equipping them for contributing to our national productivity, and ultimately enabling them to acquire Australian citizenship, if they so desire.

IDREAMOFNINJA GUEST BLOGGER STEVEN PIDGEON: Positive Borders – Opposing the Dichotomy of Open vs Closed. Context – A Policy of Genuine Economic Protectionism Within our current economic paradigm, where the worth of our currency is ultimately dictated to us by the international powers. Knowledge on the intriguingly interesting immigration debate and more.

On the subject of citizenship, we do not support dual citizenship. Thus, those who desire to acquire Australian citizenship must be willing to relinquish whatever former citizenship they hold. Of course, immigrants can remain as subjects of the State, and hold their former citizenship if they so desire, but will be unable to participate in the full capacities that will be available only to our citizens. For those asylum seekers who desire to ultimately return to their homelands, aid will be given.

Steven Pidgeon is the Leader of the Australian Freedom Party, a party established to fight for Australian independence and for revolutionary change of our economic, political and social paradigm. He is an idealist and believes that if only there is a voice of justice to unite Australians, then we can make this nation all that it was meant to be.

What you can read next:

What Would You Want Australia to Do for Asylum Seekers If You Were One? — Part One