An Overview of the Timeline of various Life Events of Shiro…

I CAN SEE MY NOSE…

trained with Students who…

Trained with Ninja of Japan… Soon so did.

Ninpo and the physical Ninja Training in Australia

began in the mid to late 1980’s. Several Aussies

had by then travelled to and fro. Japan

Satellite Classes in Queensland, Tasmania and

South Australia had begun as well and

i, Shiro was in that Class.

S. Ed had trained in Queensland with a group therein.

Then moved back to S.A. More Training and etc.

1990:…after saving furiously and working multiple jobs/shifts both the

rather tall young man and i landed on Japanese soil-the

ancestral HOME of the NINJA….

1992:…the 1st ever visit to Australia by a Ninja GrandMaster(SOKE)

and Ninja Master Instructor(SHIHAN)… the rather tall young man

given the task of event organisation

and i was added to the Security  Detail assigned…

we both had returned to Aust. by then.

so now a iDreamofNinja husband…

…and i stayed home a lot…just in case…

2012-another end of world prediction supposedly by the Maya

though this interpretation was not by them-fizzed also…

leadING to this site.

SHIRO CAN BE CONTACTED AT idreamofninja@hotmail.com 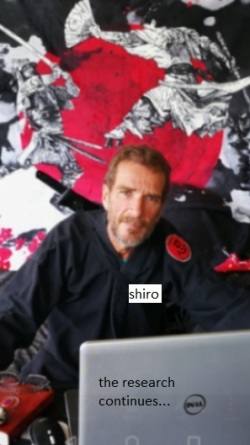